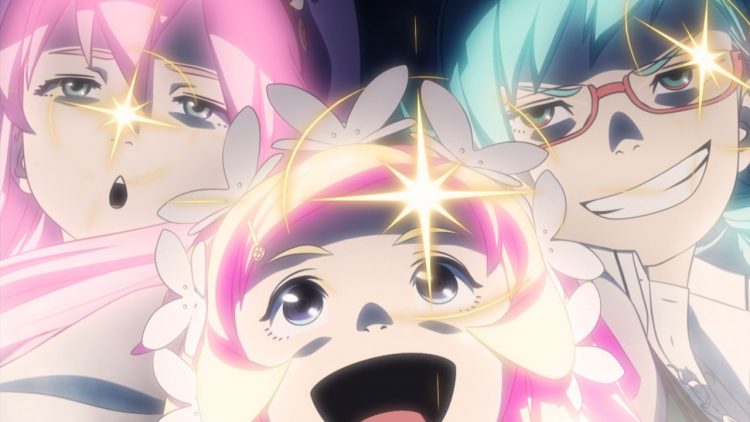 Anyway. I figured I’d at least try to do something to cap off the failed attempt. The other posts may surface at some point, if I find myself in a writing mood, but not likely anytime soon.

Now, contrary to what the title might imply, this Christmas list isn’t a list of things I want, but of shows that aired this year that meant something to me or that I particularly enjoyed for one reason or another. The list is sorted roughly in inverse order of “my gut says this goes right about here,” rather than based on any metric of relative quality. I limited myself to 24 picks because otherwise I’d be here all night.

I love the Danganronpa franchise, and it doesn’t seem likely anything will ever change that—not even this somewhat misguided conclusion to the Hope’s Peak storyline. Even when it misses the mark, Danganronpa still manages to be memorable as hell.

The first season never really went beyond “pretty fun, quirky battle series with great music,” but the second season blew the whole thing out of the water. The first four episodes were nothing short of excellent, with the rest of the series consistently stronger than its first season. And dat music.

Alderamin on the Sky

This one came as a pretty big surprise to me. What started off as a somewhat bland fantasy adventure transformed into a fascinating piece about group of soldiers thrust into a war where they know they’re morally on the wrong side. Definitely one of the least-talked-about favorites of mine from the summer season.

A great little story about the blooming of a beautiful friendship, dealing with super relatable anxiety issues, and, of course, terrifying alien cat creatures.

Come for the samurai befuddled by modern-day technology, stick around for the incredibly charming cast.

Show by Rock is one of the few series I can wholeheartedly recommend to absolutely anyone with absolutely no reservations. It’s a fun show with a huge heart, and the second season effortlessly continues in that tradition.

It’s JoJo goodness, but not the slog Part 3 was.

Fune wo Amu / The Great Passage

Thanks a lot, Amazon.

I just want to give Naho the biggest hug ever. ;_;

A damn solid entry into the SemicolonADV series. Not quite up there with Steins;Gate, but definitely a strong contender. And holy shit did it look fucking incredible.

Nothing will ever dethrone Saki as my favorite sports series, but for all its underlying issues, Scorching Ping Pong Girls managed to scratch that itch in a great way.

I could spend a good hundred episodes just basking in the sweet, quiet, lovely atmosphere of Flying Witch. Please, anime gods, let me have this.

So many people have written so much about this show that anything I come up with has probably been said better a dozen different ways. But it’s been a great little (and not-so-little) adventure of discovery and growth, and it’ll probably stick around in my mind as one of the most memorable shows of the year.

Incomprehensible gibberish with nauseating camerawork and some pretty great fight scenes. I rarely, if ever, had any idea what was going on, and I’m not even sure the author did either. But it’s fuckin’ hilarious.

It’s ugly as balls, but I’ll be damned if Ajin wasn’t one of the most consistently exciting, edge-of-your-seat thrillers of the year.

While I sort of stopped caring about the actual competition aspect of the show by its latter half, that did little to get in the way of the beautiful relationship between Yuri and Victor that stood strong as the series’ heart.

I’m not crying. It ended six months ago. Why would I still be crying.

I’m honestly not sure how to talk about this show, so I’m not even going to try. But in terms of leaving an impression on me, I can’t deny it did one hell of a job of that.

Whatever bizarre series of events allowed this work of comedy genius to come into the world needs to happen again, and soon.

I don’t think anyone needs me, of all people, to tell them how masterfully constructed Euphonium is on almost every level. It’s a grounded and so deeply human drama that even when it missteps, it’s impossible not to love.

Re:ZERO -Starting Life in Another World-

If you’ve even so much as come into contact with me at any point in the last nine months, it should come as no surprise that Re:ZERO is at the top of this list. The show sunk its teeth into me from the very first episode and never let go. With a balanced blend of fantasy adventure, mystique, intrigue, and an extremely solid emotional foundation, Re:ZERO is a series that’s going to stick with me for years to come (if for no other reason than it’ll take at least that long to even finish).