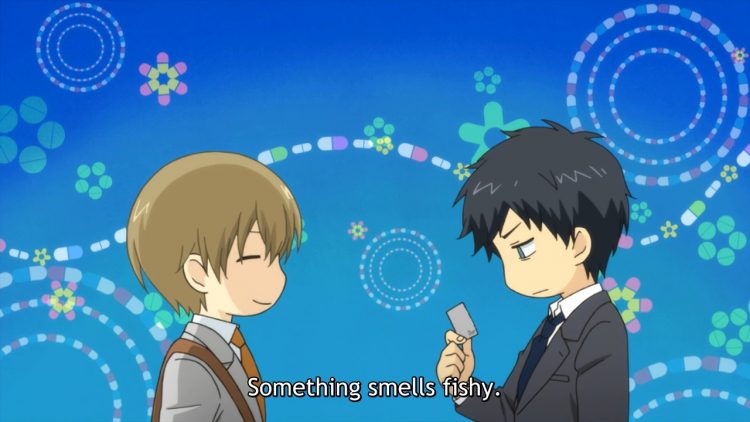 High school sucked. I think most of us can agree on that.

Even being mostly non-social, I found myself involved in more than enough drama to fill out a standard twelve-episode anime series and then some. (In fact, I even had the dumbass idea to try and turn some of the shit that happened into a novel—a 50,000-word mistake that will never, ever see the light of day.)

If I were ever given a chance to do those years over, I would get the fuck out as fast as I could—there’s no possible arrangement that could make that worth it.

Now, that last one might sound familiar, if you watched, or even came across, a little-discussed series this year called ReLIFE. (You didn’t think I would title my posts like this and NOT discuss the shows with Re in the name, did you?)

ReLIFE is about Kaizaki Arata, a 27-year-old man who’s down on his luck—can’t find work, just lost his last steady source of income, and is at a loss about where his life is going. Then, one night, Kaizaki is approached by Yoake Ryo, who offers him the chance to participate in the ReLIFE program, which entails him reverting back to his teenage body and attending high school for a year as a way of rehabilitating him and re-preparing him to go back out into the world.

(Note: this has no relation whatsoever to Re:LieF, an eerily similarly titled and premised 2016 visual novel in which a group of adults enroll in a school on an island exclusively with other adults in their adult bodies. But otherwise serves a similar purpose.)

ReLIFE impressively manages to avoid most of the inherent creepiness in this concept, in part by having his supervisor attend school with him, and in part by maintaining a strong emotional core throughout the series. Each of the characters have their own concerns and personal issues, but it sidesteps the god-complex tendencies of many similarly structured shows by emphasizing the value of letting people make mistakes and not clearing the way for them.

Thus, Kaizaki’s presence is felt, but he doesn’t go around solving everyone’s problems—and that’s important for him as well. Giving him the chance to feel like his existence actually matters, like he’s got some real value in the world, is probably better for building a healthy sense of self-worth than if he just miraculously saved everyone around him.

Kaizaki’s situation is a painfully familiar one—I’m about the same age, and I spent several years out of college jobless and unable to find any sort of work. Sending out applications, going in for interviews, getting rejected (or hearing nothing back at all). A black hole of effort that, for the longest time, I couldn’t seem to escape. It wasn’t until recently that I even started feeling like I was doing anything meaningful with my life—and it was mostly through luck and a series of weird coincidences that I even ended up here. So as much as the idea of actually going back to high school repulses me, the conceit of getting some sort of do-over is, in some ways, still a rather attractive one.

If just for the comfort that hopefully things wouldn’t be quite such a fucking disaster this time around.